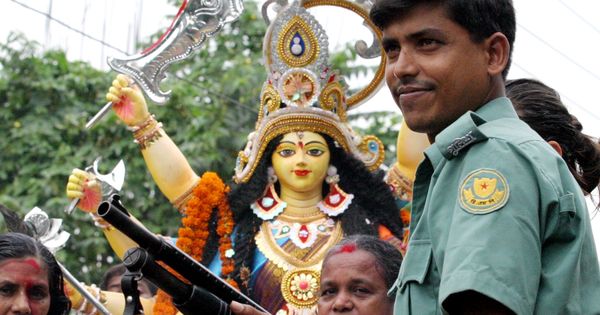 The Bangladesh government has geared up to ensure peaceful Durga Puja celebrations in Comilla city, where marquees were desecrated last year over an alleged blasphemous incident.

The government has suggested that Durga Puja be held inside temples this year for better protection of the idols. Comilla District Collector Md Kamrul Hassan said all precautionary measures are being taken for the peaceful conduct of the festivities.

“We are giving a lot of effort to ensure peaceful celebration of Durga Puja. The Bangladesh government has sent an instruction that all measures be taken to ensure communal harmony during the festivities.

“We have convened a meeting with Durga Puja committees in the district on September 21. Representatives of the administration and police will also take part in it,” he told PTI.

Security will be beefed up in the run-up to the celebration that begins on October 1 and the administration is keeping a close watch on the situation, the official said.

On last year’s violence, he said, “It was an organised conspiracy by groups with vested interest to disrupt the communal harmony but this year, they would not be successful as the entire administration is on alert. We would suggest that the pujas be conducted inside temples so that we can prove better protection.”

“The government has given a facelift to many temples in the district as well as across the country. Amounts up to Taka 25 lakh have been sanctioned for the renovation of temples,” the lawmaker told PTI.

Bahauddin said he was absent from the city when violence erupted last year.

A ‘Muktijoddha’ or freedom fighter who received training from the Indian Army in Assam’s Halfong during the 1971 Liberation War against Pakistan, he said, “This year, I will be in the city and personally oversee the puja celebrations so that no one can disrupt communal harmony.”

A string of attacks had taken place last year on puja pandals in Comilla and other parts of Bangladesh triggered by alleged disrespect to the Holy Quran in a marquee. However, security forces had swung into action and brought the situation under control, arresting many miscreants.

Comilla Mahanagar Durga Puja Udjapan Parishad (Committee for celebration of Durga Puja in Comilla city) general secretary Achinta Das Titu said the administration has assured the Hindus of the city that full protection would be given to them during puja celebration.

“If attacks take place on pandals even this year and the government fails to resist those, we will have to believe that attacks on marquees are pre-planned and an evil design to drive away the Hindus from this country,” said Titu, who is also the president of the puja committee of Nanuar Dighirpar which was desecrated by miscreants last year.

He said Hindus are united this year to celebrate the puja in “any given situation”.

When asked about the government’s plan to conduct Durga Puja inside temples, Titu said, “We welcome it as we don’t want to block the roads. Also, we think that better security can be provided to the idols inside temples or well-fenced locations.”

Sanjib Kumar Deb, the president of the Brahmanpar sub-division unit of Bangladesh Hindu, Bouddha, Christian Oikya Parishad (committee for unity among Hindus, Buddhists and Christians of Bangladesh), expressed hope that Durga Puja will be celebrated peacefully this year.

“We have full faith in the measures taken by the administration,” he said.

Preparation for Durga Puja celebrations among Hindu families is underway as usual.

“I had panicked due to last year’s violence but I hope the administration has taken adequate measures to ensure peaceful celebration this year,” Sajib Das, a resident of Manoharpur locality in Comilla town, said. (PTI)