Border issues between northeastern states, disputes related to armed groups to be resolved before 2024: Amit Shah 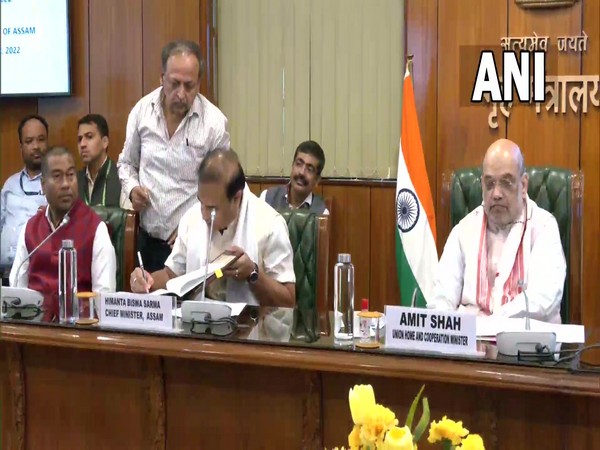 Union Home Minister Amit Shah on Thursday said that the Centre has decided to resolve all border disputes between the northeastern states and all disputes related to armed groups before 2024.

Amit Shah, who presided over the signing of a historic agreement between the Centre, Assam government and representatives of eight Adivasi Groups in New Delhi, said the accord will prove to be another important milestone towards making the northeast extremism-free by 2025. He said this was in step with Prime Minister Narendra Modi’s vision of a peaceful and prosperous northeast.

Amit Shah said the Ministry of Home Affairs has decided to promote and develop the culture of the northeast, establish lasting peace by settling all disputes and accelerate development in the region to make it as developed as other parts of the country.

He said the government has a record that it has fulfilled 93 per cent of all the agreements signed so far, resulting in the restoration of peace in the entire northeast including Assam.
“The Central Government, under the leadership of Prime Minister Narendra Modi, has decided that before 2024, all border disputes between the North Eastern states and all disputes related to armed groups will be resolved,” he said.

The Home Minister said that his ministry has taken steps to accelerate development in the northeast to make it “peaceful and prosperous”.
“Due to lack of communication and conflict of interests, different groups took up arms due to which thousands of lives were lost in the encounter between these groups and the state governments and central security forces,” he said.
“In the last three years, the Government of India, the Government of Assam and other governments of the North East have entered into several agreements among themselves and with various extremist groups. NLFT agreement in 2019, BRU-REANG and Bodo accord in 2020, Karbi Anglong agreement in 2021 and Assam-Meghalaya Inter-State Boundary Agreement in 2022, which resolved around 65 per cent of border disputes between the two states,” he added.

He said as per today’s agreement, it is the responsibility of the Government of India and Assam to fulfil the political, economic and educational aspirations of the Adivasi groups.
“In the agreement, provisions have been made to protect the social, cultural, ethnic and linguistic identity of Adivasi groups as well as to further strengthen them,” he said.
Shah said that the agreement also provides for rehabilitation and resettlement of armed cadres and measures for the welfare of tea garden workers.