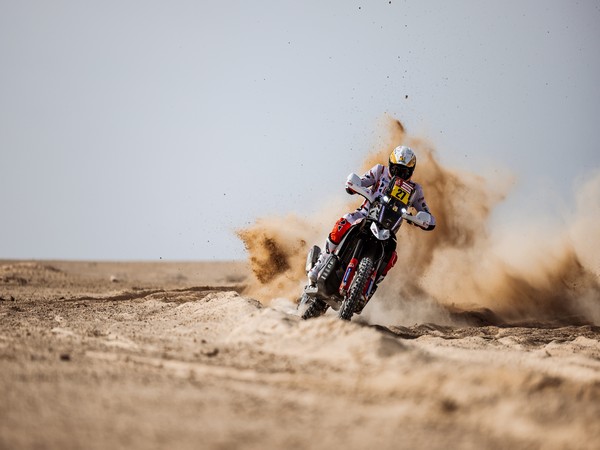 Hero Motosports Team Rally, the motorsport team of the world’s largest manufacturer of motorcycles and scooters – Hero Moto Corp- began its seventh consecutive Dakar Rally – the toughest race on the planet – at the Sea Camp near Jeddah, Saudi Arabia on Saturday.
The Hero Motosports team features a stellar squad of four Rally GP class riders – Franco Caimi, Joaquim Rodrigues, Ross Branch, and Sebastian Buhler.
Starting their campaign on a strong foot at the 45th edition of the Dakar Rally, the Team finished the 13-km long Prologue stage with three riders in the top 10 positions. Ross Branch achieved a spot on the podium with 3rd place, followed by Joaquim Rodrigues in the 6th and Sebastian Buhler in the 8th position. Franco Caimi is in the 20th position in the Rally GP Class.

After a short start podium ceremony, riders completed the short 13-km special on the seafront, which gave the top 10 finishers an advantage of choosing their starting positions for the first stage due on the 1st of January, 2023.
The first official stage of the Dakar Rally 2023 will take the riders around a 603 km loop around the Sea Camp with 367 kms forming the special section. Sandy tracks follow stony sections with a fair bit of gravel in this first taste of the desert in the eastern region. The rally now travels inland towards Ha’il, and heads southeast to cross the infamous Empty Quarter, and then moves northwards to the final finish at Dammam, on 15th January 2023. A rest day after 8 stages is the only respite that the competitors will have on this route which traverses over 8600 kms, of which 4700+ kms are timed sections.

Dakar 2023, the fourth consecutive edition in Saudi Arabia, will run for 14 stages over 15 days – two stages more than before – and is expected to be more difficult than the previous editions.
The 45th Dakar Rally is also the opening race of the 2nd edition of the World Rally Raid Championship (W2RC). Hero MotoSports is a Rally GP class participant at the W2RC and will participate in its five rounds starting with the Dakar, followed by the Abu Dhabi Desert Challenge (Feb 2023), Sonora Rally in Mexico (Apr 2023), Desafio Ruta 40 in Argentina (Aug 2023), and closing the season with the Rallye du Maroc (Oct 2023).
“We are back at Dakar after a full year of preparations, and I’m happy that our riders have secured solid results to get good starting positions in the first stage, the first day of 2023. The race is by two days in this edition – eight full stages till rest day, and another 6 till the finish. Some especially hard stages await us during the last few days, in the Empty Quarter, which hosts an endless sea of dunes. All our riders are in top shape and we hope the year’s preparations will pay off well. I’m eagerly looking forward to the next 14 days, ” said Wolfgang Fischer, Team Manager of Hero Motosports Team Rally.

“It’s great to be back at yet another Dakar. I feel really lucky to be at the start line with an amazing team having my back. Today’s prologue stage was slippery, but I went all out, had fun, and finished well as I had hoped. It puts me in a good spot to start the first stage. I’m looking forward to some long days on the saddle and good navigation. Spending time on my Hero 450 Rally is going to be incredible. Thank you everyone for your support and love, ” said Hero Motosports Team Rally rider Ross Branch.
“It’s just a prologue, but it was a good warm-up before the race. From the prologue result, we know that we have speed and that we are battling for the top positions. It is a long, tough race however and speed is not the only thing that matters. We need to be smart and have to take good care of the bike for 15 days. It’s going to be really hard for both man and machine, but Hero MotoSports team has been doing a great job, and we are well prepared for this run, ” said Hero Motosports Team Rally rider Joaquim Rodrigues.

“I’m very happy to be at the start of the Dakar again, after a year’s gap. The prologue today was a bit difficult with some parts having good traction, while some being very slippery. I maintained my pace to stay safe, and the end result was in my favour. I’m in a good position to start the first stage, and looking forward to a great Dakar, ” said Hero Motosports Team Rally rider Sebastian Buhler.
“I’m really happy to be back at Dakar after two long years. I felt good on the bike today, and it was working perfectly well. The prologue has released some tension about the first racing day, and we are ready to start with the first real cross-country Dakar stage. Looking forward to a great race ahead, ” said Hero Motosports Team Rally rider Franco Caimi. (ANI)