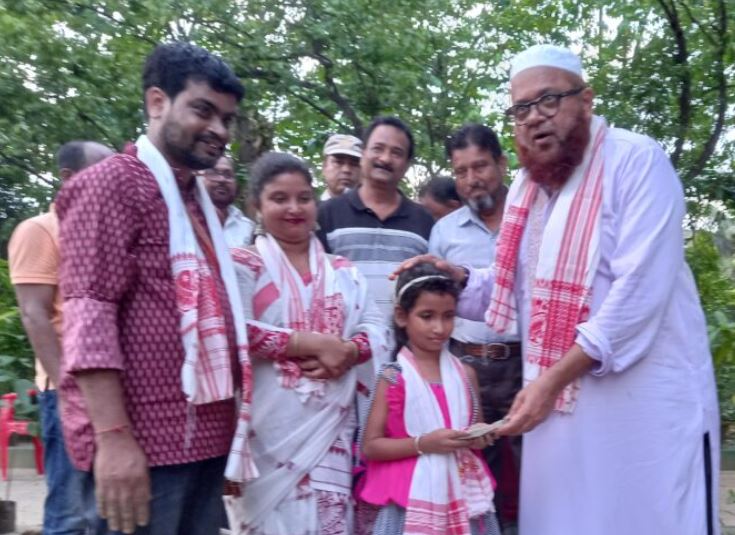 Sirajuddin Ajmal, MLA, Jamunamukh felicitated Tamanna Shandyal, a little from Golaghat and named her ‘Tree Madam’. After learning about the noble endeavours and environmental consciousness of Tamanna Shandyal, Ajmal invited her to his residence in Hojai along with her parents Diganta Sharma and Papri Sharma, in order to encourage her efforts and felicitate them.
Ajmal warmly welcomed them and handed over a cash award of Rs 50,000 to Tamanna Shandyal and planted one sandalwood and one agarwood plant along with her at the Research and Development Centre, Flower Valley Agrotech Pvt. Ltd, Gopal Nagar in Hojai on Sunday. Talking to this correspondent, Sirajuddin Ajmal said, “I met a special guest. Her name is Tamanna Shandyal and she is from Golaghat.”
He said, “Despite being only five years of age, Tamanna has a hobby of planting saplings. As per report, she has planted more than 500 saplings so far.”
He added, “She is a perfect inspiration for us and the youths.”
He said that in a bid to appreciate her he has extended a cash award along with a surname ‘Tree Madam’.
“I wish her all the best for her future,” Ajmal said.
It is pertinent to mention that Tamanna Shandyal, a second grade student of Golaghat Sankardev Shishu Vidyaniketan, Golaghat, has received appreciation from all around Assam for her exemplary works.
Tammana’s parents said that she loved trees and nature since her childhood and she began to plant saplings from the age of three. Seeing her love for nature and her consciousness, Tamanna Shandyal has been given the responsibility of planting saplings on one hectare of land by the Assam Government.
She has gained appreciation from all corners of Assam. Chief minister Himanta Biswa Sarma; Debabrata Saikia, leader of opposition; Parimal Suklabaidya, minister of Environment and Forest, Assam; Mrinal Saikia, MLA, Khumtai constituency; Mrigesh Narayan Baruah, DC; Anand Mishra, IPS; media persons, actors and many others have praised the noble initiative of Tamanna Shandyal and has handed her appreciation letters.