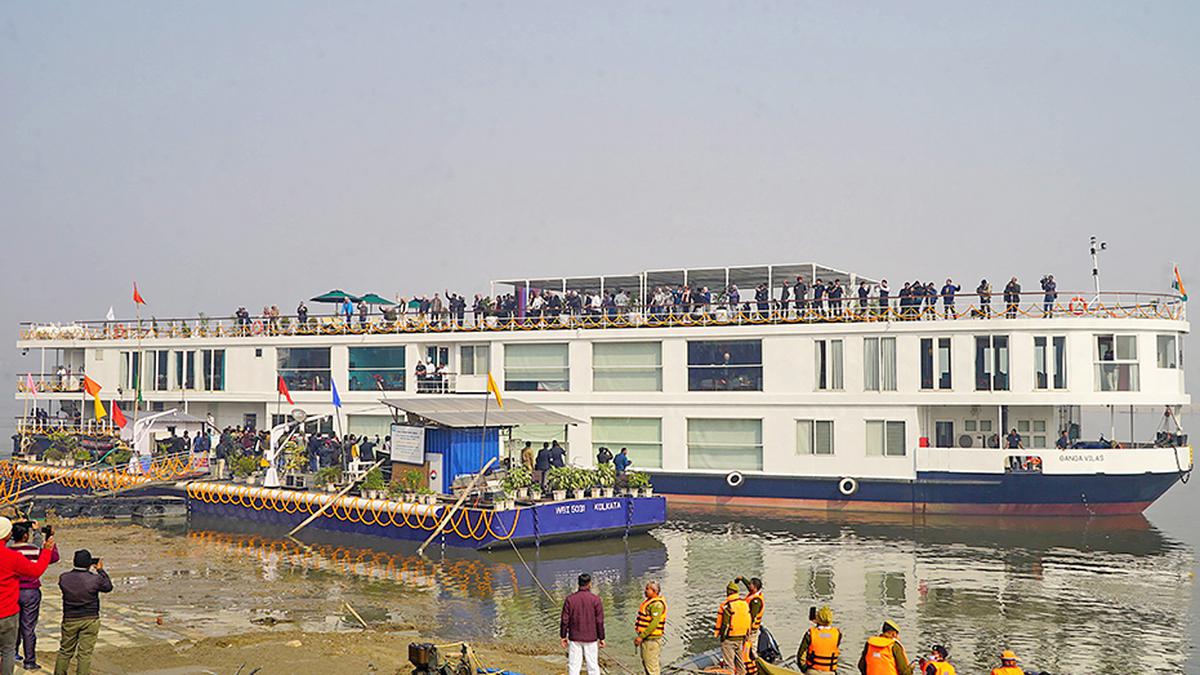 The Inland Waterways Authority of India (IWAI) denied reports that MV Ganga Vilas, the world’s longest river cruise flagged off by Prime Minister Narendra Modi, got stuck due to low water levels in the Ganga.
Reports claimed that the vessel got stuck in Bihar’s Chhapra district on the third day of its journey when it was headed to Chirand, an archaeological site in Saran district. As information about the cruise reached the State Disaster Response Force (SDRF), a team reached the stranded vessel with a motor boat and safely brought the tourists ashore.

Speaking to The Hindu, Anand Kumar Vibhuti, Block Development Officer (BDO) of Saran Sadar said, “As you know, it is the longest river cruise in the world and the water level of river Ganga was not adequate. However, foreign tourists did not face any trouble as we quickly sent a motor boat to bring them to the archaeological site.”

He further said, “All tourists were welcomed by a musical band of the villagers and given roses. Tilak was also applied on forehead. The tourists praised the efforts of the district administration. We made all arrangements for the tourists and ensured that no one faced any trouble due to the episode. After they visited the archaeological site, they returned to the cruise happily and left for Patna.”
‘Was not stranded’
However, IWAI Chairman Sanjay Bandopadhyaya said the cruise reached Patna as per the schedule and was not stuck in Chhapra. He also said the vessel will continue its journey as per schedule. “The Ganga Villas reached Patna as per schedule. There is absolutely no truth in the news that the vessel is stuck in Chhapra. The vessel will continue its onwards journey as per schedule,” IWAI said in a tweet quoting Mr. Bandopadhyaya.

The operators of the vessel also said it was not stuck and “technically can’t go” to the shore. “[Where] river is not deep, you have to use shallow boats to get off and on to see the site. The main ship stays in the main channel where there is water. This is what happened here. It is the norm. This is the normal thing,” Raj Singh, chairman, Exotic Heritage Group, explained.

The operators also said the vessel with its clients is running as per schedule and is anchored in Patna and will set sail after sightseeing.

They said that small boats are usually required “to take the guests to shore”. “We have the same arrangement for the Sundarbans and rest of West Bengal too. This has been the plan all along. If the ship gets close to the shore it may get stuck and hence we use local boats which also provides some income to the local residents.”

Thirty-two tourists from Switzerland are enjoying the journey from Varanasi to Dibrugarh in the luxury cruise. MV Ganga Vilas will cover nearly 32,000 km over 51 days while navigating through several States and end its journey at Dibrugarh in Assam.

(With inputs from ANI)