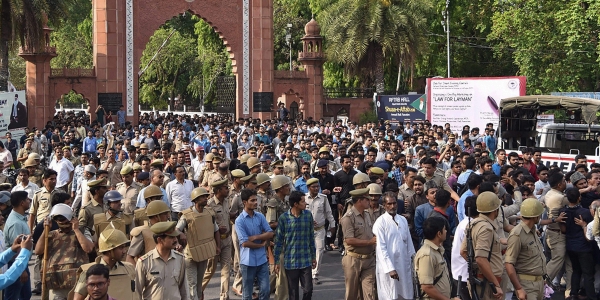 The Uttar Pradesh police on Thursday said they were yet to find any primary evidence against 14 Aligarh Muslim University (AMU) students booked for sedition a day earlier.

The students were booked on the complaint of an office-bearer of Bharatiya Janata Party’s youth wing after two groups clashed on campus on Tuesday following a protest over an altercation with a Republic TV crew. The 14 have been accused of raising pro-Pakistan slogans.

“We are yet to find primary evidence for sedition charges against the AMU students. Investigations are in preliminary stages and we are taking note of the facts [we are] coming across,” said Aligarh’s senior police superintendent, Aakash Kulhari.

The Aligarh Muslim University Teachers’ Association (AMUTA) condemned the “severe charges like sedition” against the students and wrote to President Ram Nath Kovind over it. It asked Kovind to take cognizance and “send a strong message that sedition charges should be invoked only after thorough inquiry and not on hearsay within a few hours of the alleged incident”.

The AMU Students Association also wrote to Kovind. “There have been repeated attacks on the AMU by right-wing forces and some sections of the media with the intention of maligning the university over false charges,’’ it said in a letter to Kovind. “Fourteen students have been falsely booked on charges of seven serious crimes including sedition. This has left the students of AMU ‘hurt’ and ‘offended’. The university has been declared an ‘institution of importance’ and its students have always stood for the country. Repeatedly questioning our loyalty to the country is an insult not only to students but also to the Constitution.”

Ajay Singh, who leads another group of AMU students, asked the AMU administration to act against students responsible for violence on the campus. “Else we would launch an agitation.”

The AMU management said classes were held and the library was open on Thursday even as students gathered on campus to stage a protest against the sedition charges. Separately, the district administration restored Internet services in the city snapped, day earlier, as a precaution to prevent violence.