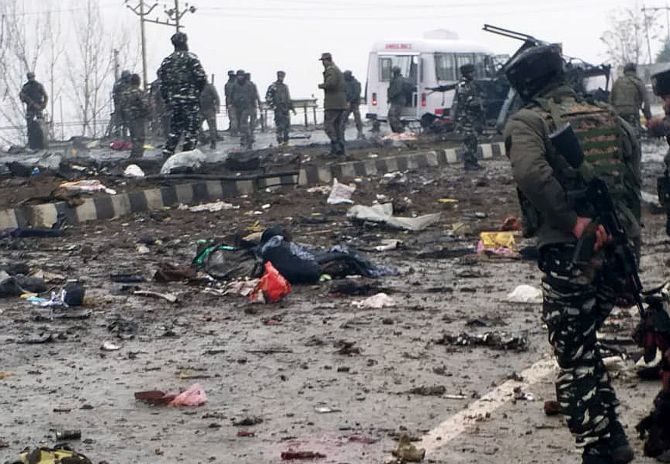 Prime Minister Narendra Modi, who referred to the Pulwama attack that left 43 CRPF jawans dead as a “despicable attack”, took stock of the situation in Jammu and Kashmir in a conversation with both the home minsiter Rajnath Singh and the national security advisor Ajit Doval.

A Cabinet Committee on Security (CCS) meeting has been called at 9:15 am on Friday.

Minutes later, the home minister’s public rally in Bihar was cancelled, instead he will now be heading to Srinagar tomorrow morning along with the Director General Rajeev Rai Bhatnagar.

In Jammu and Kashmir, Rajnath is expected to take stock of the situation as well as meet some of the injured soldiers at the hospital. Soon after his conversation with the PM and NSA, Rajnath Singh spoke to the Jammu and Kashmir governor Satyapal Malik regarding the attack.

Rajnath has also spoken to Union Home Secretary Rajiv Gauba, who had just reached Thimpu in Bhutan and has summoned him back to Delhi. A 12-member team of the National Investigative Agency (NIA), led by an IG-rank officer will also go to the blast site in Pulwama.

“The attack was carried out by Pakistan-backed Jaish-e-Mohammed. A strong reply will be given and I assure the people of the country this. The country pays tribute to the brave jawans who were martyred,” Home minister Rajnath Singh said.

Meanwhile, NSA Ajit Doval, who is closely associated with the surgical strikes, is monitoring the situation and is in touch with senior CRPF officers briefing him on the situation on a minute-to-minute basis.

Union Home Secretary Rajiv Gauba who had reached Thimpu in Bhutan earlier today for the annual Secretary-level talks, has decided to cut short his visit and rush back.

Expressing his condolences over the attack, the prime minister tweeted, “Attack on CRPF personnel in Pulwama is despicable. I strongly condemn this dastardly attack. The sacrifices of our brave security personnel shall not go in vain. The entire nation stands shoulder to shoulder with the families of the brave martyrs. May the injured recover quickly.”

Union finance minister Arun Jaitley took a slightly stronger tone in his tweet promising an unforgettable lesson for the terrorists.

“Attack on CRPF in #Pulwama, J&K is a cowardice & condemnable act of terrorists. Nation salutes martyred soldiers and we all stand united with families of martyrs. We pray for speedy recovery of the injured. Terrorists will be given unforgettable lesson for their heinous act,” Jaitley tweeted.

His sentiments were echoed by MoS home, Kiren Rijiju, who referred to it as a “cowardly” terror attack and said that “it won’t go unpunished, we will avenge.”

Jammu and Kashmir Raj Bhawan PRO on Pulwama attack said, “Governor Satyapal Malik observed forces responsible for the insurgency in Jammu and Kashmir are desperate and frustrated and just want to prove presence. Visibly it seems to be guided from across border as Jaish-e-Mohammad has claimed responsibility.”

In the attack that took place around 3pm, a Mahindra Scorpio, loaded with nearly 250kg of explosives rammed into a convoy of the security forces, leaving as many as 43 CRPF jawans dead.

The Jaish-e-Mohammad has claimed responsibility for the attack and has also identified the suicide bomber — Adil Ahmad — who allegedly carried out the attack.