“Not a member of electoral college”, Himanta Sarma responds to Jairam Ramesh’s tweet as Alva reaches out to CMs 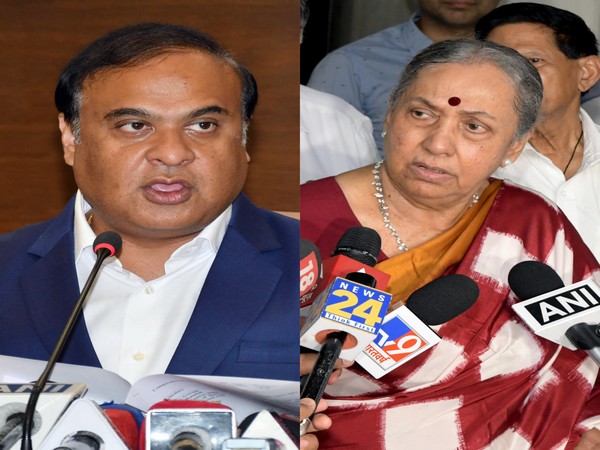 Assam Chief Minister Himanta Biswa Sarma on Sunday, in an apparent swipe at the Congress, confirmed having a conversation with Opposition candidate for the vice presidential polls, Margaret Alva, who reached out to the chief ministers of various states as part of her campaign. Sarma said he “politely” told Alva that he has “no role” in the election of the Vice President.

The Assam CM’s remarks came after Congress General Secretary Jairam Ramesh said that Alva’s conversations with the chief ministers of Assam, Karnataka and Delhi were “very cordial and friendly”.
“Smt. @alva_margaret took charge of her campaign office at 1, Pt Ravi Shankar Shukla Lane today. She spoke to CM Assam, CM Karnataka, and CM Delhi as part of her Vice Presidential campaign. The conversations were very cordial & friendly given her long political career & associations,” Ramesh tweeted.
Responding to his tweet, Sarma, while confirming having a conversation with the Oppostion’s candidate, said that he is “not a member of the electoral college”.
“Smt. @alva_margaret spoke to me this morning. I politely told her that I’m not a member of the electoral college. As such I have no role in the election of Vice President of India,” Sarma tweeted quoting the Congress leader’s tweet. 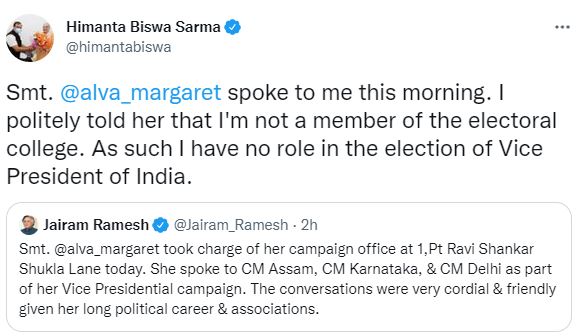 Notably, the Vice President of India is elected by the electoral college consisting of the MPs of the Lok Sabha and Rajya Sabha which is in accordance with the system of proportional representation. Only the members of the Parliament are eligible to vote in this election while the chief ministers of the states are ineligible to cast their votes, unlike the Presidential elections in which the MLAs cast their votes via secret ballots.
Interestingly, Alva held conversations with the chief ministers of various states. She met Delhi Chief Minister Arvind Kejriwal on Saturday and sought his support for the upcoming Vice Presidential polls slated to be held on August 6.
She filed her nomination for the election on July 19.

Earlier Saturday, Alva said that she would even ask Prime Minister Narendra Modi and BJP national president JP Nadda to vote for her.
“I have started talking to the Chief Ministers of all the states who are supporting me but I will also talk to the chief ministers who are not in my support. For example, I will talk to Karnataka CM, Assam CM and even UP Chief Minister Yogi,” Alva told ANI.
“Adityanath because we have an old relationship with him when he was MP and Adityanath is my good friend,” he added.
She further stated that she will also talk to West Bengal Chief Minister Mamata Banerjee.
“The basis for seeking votes from everyone is that I am a woman and for the first time in front of the country, there is a woman Vice Presidential candidate, so everyone should support me,” she added.

On being asked whether she will write a letter to the Prime Minister and BJP President Jagat Prakash Nadda for votes? she said, “Why not? The Prime Minister is also an MP.”
NDA’s candidate Jagdeep Dhankhar will face Opposition candidate and veteran Congress leader and former Union minister Margaret Alva in the August 6 Vice Presidential election.
Opposition parties on July 17 decided to field former Rajasthan Governor and former Union minister Alva as their joint candidate for the vice presidential election.
The decision to field Alva was taken at a meeting of opposition leaders of 17 parties at the residence of NCP supremo Sharad Pawar. (ANI)