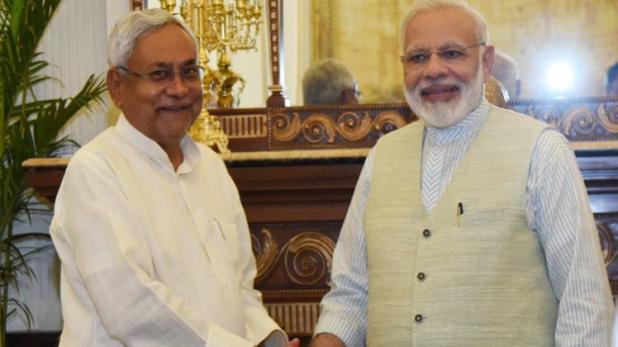 Prime Minister Narendra Modi and Bihar chief minister Nitish Kumar will address a joint rally at Patna late February or early March to launch the NDA campaign in Bihar for the 2019 Lok Sabha elections. It will be the first time that they will share a stage in a political meet.

Though the dates have not been finalized yet, a Janata Dal (United) spokesperson said the party has proposed three dates – March 3, 4 & 5 – for the rally that will also see participation of other senior NDA leaders, especially, Lok Janshakti Party chief and union minister Ram Vilas Paswan. BJP leaders, however, said it has to be on a Sunday and hence the chances of holding the rally either on February 24 or on March 3 stand strong.

“We are coalition partners. Hence, a joint rally, rather more than one rally, has always been there in our planning. One should not read much in the event or them sharing the stage,” BJP state vice-president and headquarter in-charge Devesh Kumar, said.

JD (U) spokesperson Ajay Alok said that there is absolutely no hitch in the duo sharing the stage. “Now a formal date has to be announced. Preparations have begun to make the rally a mega success,” he said.

A BJP leader, requesting not to be identified, said that the proposal of a joint rally of the two leaders was mooted in a recent meeting between BJP’s Bihar in-charge, Bhupendra Yadav and Nitish Kumar, and was instantly agreed to. Both parties now await finalization of the date from Prime Minister’s Office.

Asked about the matter by media after his Lok Samvad (public interaction) programme on Monday, Nitish Kumar said, “Yes, the talks are on and the PM is likely to visit Patna” but did not divulge any more details.

Nitish Kumar’s 15-year-old love-hate relationship with Prime Minister Modi has frequently figured in the headllines. However, it has come a full circle now — from that of love to hate and back to love again – with both displaying mutual respect and praise for each other from public forums since Nitish Kumar rejoined the NDA in July 2017.

The two leaders have not been known for their bonhomie. After the 2002 Gujarat riots, Nitish Kumar had made it clear to the BJP’s central leadership that he did not want Modi, then the Gujarat chief minister to campaign in Bihar – a condition which was complied with in the 2005 and 2010 assembly elections and the 2009 parliamentary polls.

In 2013, Nitish Kumar had broken away from the NDA when it pitched Modi as its Prime Ministerial candidate. In the run up to the 2015 assembly elections, after Kumar formed the Grand Alliance (GA) with the Congress and the Rashtriya JD, the two leaders have been engaged in sharp political attacks against each other.

PM Modi’s barb on Nitish Kumar’s political DNA had provided the alliance campaign some much-needed boost ahead of the elections and eventually led to NDA’s rout. Kumar had successfully presented it as an attack on Bihar’s pride, which moved the state’s voters cutting across their caste, creed and religion.