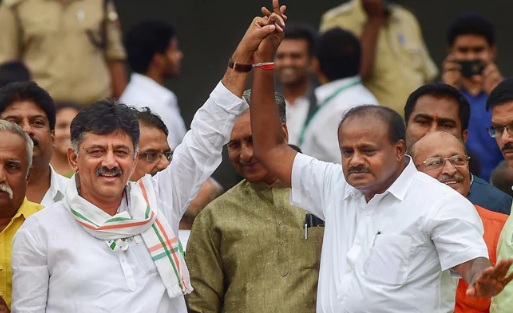 Andhra Pradesh Chief Minister Chandrababu Naidu, the self-appointed facilitator for a united opposition, pressed on with the task today, meeting former Prime Minister HD Deve Gowda and his son HD Kumaraswamy, who is also the Chief Minister of Karnataka. The three leaders agreed that bringing together the opposition was the need of the hour to “save the country’s institutions” from the BJP — the question of prime ministerial candidate is one that can wait.

The meeting comes days after the Congress and Mr Kumaraswamy’s success at the by-elections in Karnataka, a 4:1 victory that has put fresh heart in the opposition. The Karnataka Chief Minister — who hosted the first unofficial meet of the opposition at his oath ceremony in May — said it proved that arithmetic was crucial and the opposition, if united, can beat the BJP.

After the meeting, Mr Kumaraswamy said he was confident of victory in the Lok Sabha polls. “1996 will repeat in 2019,” he said, referring to the time when various regional parties managed to cobble up a United Front with Congress support and his father as the Prime Minister.

Mr Naidu, who came to Delhi last week and met a string of opposition leaders including Congress chief Rahul Gandhi — whom he is partnering for the coming elections in Telangana — Sharad Pawar and Farooq Abdullah, said his next stop will be in Chennai tomorrow to meet DMK chief MK Stalin. Over the last weeks, the chief of Telugu Desam Party has been on the go, meeting Mayawati — an ally of Mr Kumaraswamy — Samajwadi chief Akhilesh Yadav, Bengal Chief Minister Mamata Banerjee and Delhi Chief Minister Arvind Kejriwal.

“It is essential that the opposition unite to save democracy at a time when national institutions such as the Reserve Bank of India and the Central Bureau of Investigation have been compromised,” said Mr Naidu. “The investigation agency, which is supposed to be autonomous, is now being used to keep the opposition under control,” said the Chief Minister who has faced raids by the Income Tax Department along with several of his ministers.