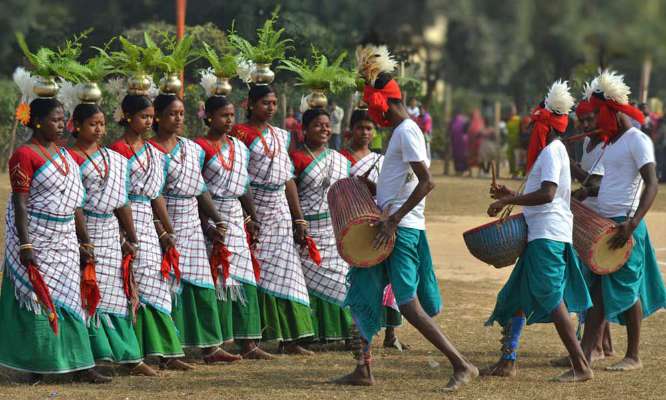 TEZPUR, Jan 5 – Chief Minister Sarbananda Sonowal today said that the Santhal community living in the region has played a major role in the nation-building process and as a mark of ecognition, the BJP government will do whatever is necessary to give ST status to it.

Attending as the chief guest at the 11th annual conference of the Santhal Student’s Union held at Kawoimari under Dhekiajuli LAC in Sonitpur district, he also promised that the landless people of the community will be provided land pattas. “Moreover, for skill development of the youth sections of the Santhal community, the government will take up special programmes. A cultural hub will also be set up in Guwahati as also a hostel for the students coming from far-flung areas to Guwahati for their studies,” he said. He also announced an allocation of Rs 1 crore for the project.

Besides this event, the Chief Minister attended a series of meetings in Dhekiajuli and Tezpur. In Dhekiajuli, he also laid foundation stone of construction work of roads at various locations in and around Dhekiajuli town that are named after the martyrs of the 1942 Quit India movement.

Meanwhile, Tezpur MP Ram Prasad Sarma who accompanied the Chief Minister, while briefing the media regarding the Union Cabinet’s decision on Citizenship (Amendment) Bill 2016, clearly said that the BJP is working on the citizenship Bill as per their commitment to the people. “Prime Minister Narendra Modi committed to pass this Bill in 2014 as well as in 2016. Even a notification on Hindu Bangladeshis was also issued on September 23, 2015.” Since it is the party’s declared stand, the BJP is committed to pass the bill. He also mentioned that Hindu Bangladeshis wouldn’t harm the region.

However, in protest against the government’s decision on the bill CPI,CPI-M, CPI-ML and NCP today staged a protest programme and demanded that the government withdraw their decision and state that no foreigners either Hindu or Muslims will be accepted by Assam.