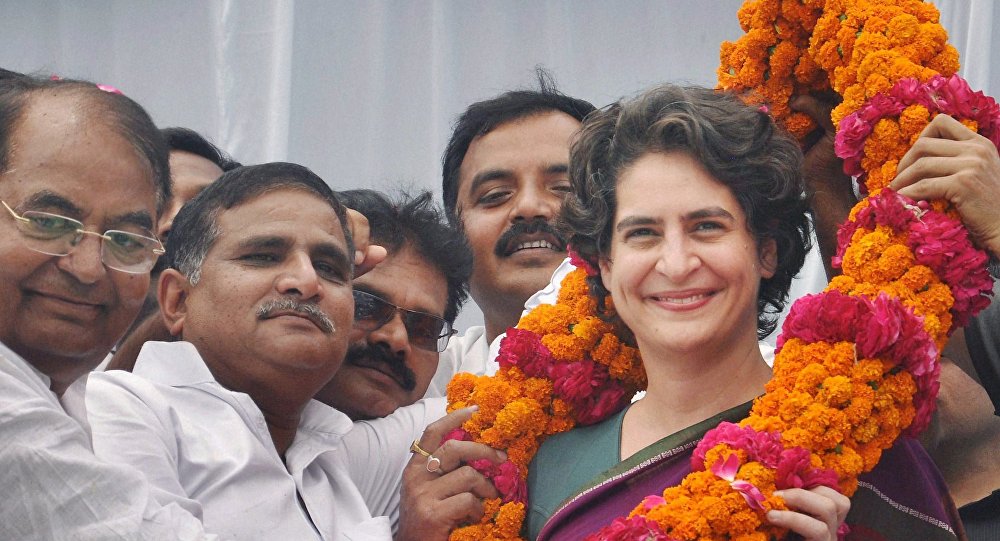 For years at every party event, Congress workers would raise the pitch for an important organisational role for Priyanka Gandhi Vadra. As the chorus grew louder and media abuzz with speculation of her playing an active role in politics, Priyanka Gandhi would issue a statement ruling out any such move.

She had limited her role to managing the election campaigns of her mother and United Progressive Alliance (UPA) chairperson Sonia Gandhi in Rae Bareli, and brother and Congress president Rahul Gandhi in Amethi.

She had even rejected the requests from Uttar Pradesh Congress leaders to step outside the family pocket borough of Rae Bareli and Amethi to campaign in other constituencies of the state.

In August 2014, after the grand old party faced its worst ever drubbing in the country’s electoral history, Priyanka Gandhi issued a statement dismissing as “conjecture” and “baseless rumours” the reports suggesting that she would take up general secretary’s post in the Congress.

“The constant conjecture about my assuming various posts in the Congress party and the manner in which this issue is brought up at opportune moments is incorrect,” she had said.

“I would be very grateful to all concerned if they desisted from encouraging such baseless rumours,” she further said.

But that was 53 months ago. On Wednesday, Priyanka Gandhi, 47, finally took a plunge into active politics with her appointment as the Congress general secretary in-charge of Uttar Pradesh East. The Congress president divided the party organisation in Uttar Pradesh, politically most important state in the country, into two units – East and West.

He handed over the charge of Uttar Pradesh West to senior leader and party’s chief whip in the Lok Sabha Jyotiraditya Scindia, who was elevated as the Congress general secretary. Uttar Pradesh – which sends the highest number of 80 lawmakers to the 543-member Lok Sabha – is crucial for government formation at the national level.

Organisational weaknesses had often been blamed for the Congress’s poor show in Uttar Pradesh where the party is desperately seeking revival of its political fortunes after being thrown out of power in 1989.

The emergence of divisive ‘Mandal-Mandir’ politics and rise of the Bahujan Samaj Party or the BSP, which took away its crucial Dalit vote base, pushed the Congress to margins in the country’s most populous state.

Considered as a good orator and crowd puller with a striking resemblance to her grandmother and late Prime Minister Indira Gandhi, Priyanka Gandhi is expected to galvanise the Congress cadre not only in the eastern part but across the state and also give a major boost to its revival efforts. Before Wednesday’s announcement, Priyanka Gandhi had to issue rebuttals about her political role from time to time.

Ahead of the 2014 Lok Sabha elections, Priyanka Gandhi had also denied a media report suggesting that she was keen to contest from Varanasi against Narendra Modi, the then Gujarat chief minister and now Prime Minister but was held back by the Congress high command.

“No one in my family would ever stop me from contesting an election. My brother, mother and husband would wholeheartedly support me if I wanted to contest,” she had said.

In the past whenever reporters asked, Congress leaders maintained that a decision on her role in the party would be taken by Priyanka Gandhi along with Sonia Gandhi and Rahul Gandhi.

Priyanka Gandhi has always taken a keen interest in the organisational affairs in Uttar Pradesh. She attended the party’s strategy discussions on Uttar Pradesh for both the Lok Sabha and assembly elections. Her name also figured on the party’s lists of 40 star campaigners for all elections in the state since 2012.

Priyanka Gandhi had been taking interest in the party events as well. She personally supervised the preparations for the party’s 84th plenary at Indira Gandhi Indoor Stadium in March last year. When she was upset over the arrangements on the first day of the session, senior Congress leaders ensured that the second day went off well.

In its bid to counter her aggressive campaigning, the BJP has often raked up the issue of the alleged land dealings of her husband Robert Vadra.

In 2012 for several months, she held weekly public ‘darbar’ in Delhi for the people from Rae Bareli and Amethi. During the 2017 assembly elections, poll strategist Prashant Kishor had suggested that Priyanka Gandhi should lead the party’s campaign but the Congress turned down the proposal.

However, she played a key role in stitching the alliance with the Samajwadi Party or the SP and took part in negotiations with the then UP chief minister Akhilesh Yadav regarding the tie-up. She had also dismissed speculation about her contesting the upcoming Lok Sabha elections from Rae Bareli.

“There is no question of me contesting from Rae Bareli…my mother will contest from there,” she had said on the sidelines of a function held at the party headquarters on December 16, 2017 to formalise Rahul Gandhi’s takeover as the Congress president.

Senior leader Janardan Dwivedi once spoke about her interest in politics from an early age and that former Prime Minister Rajiv Gandhi had told him about her political interests in 1990.

“As far as I know, she has keen interest in politics from early age. She wanted to understand political events and political language. I have an evidence of it. But I don’t want to discuss it now. I can only indicate that in this context Rajiv Gandhi had told me something in 1990,” he had said.

In January 2014, Rahul Gandhi had told Hindi daily, the Dainik Bhaskar, “Priyanka is my sister and friend. Besides she is an active member of Congress and that is why she is lending a helping hand to strengthen me and the organisation. I do not think she will have any electoral role.”

“My decision to not contest is personal. I will only change it when I feel from within that I should,” Priyanka Gandhi had once said. Her remarks were interpreted by many in the Congress as keeping open the option of contesting elections in the future. After Wednesday’s development, that possibility cannot be ruled out.