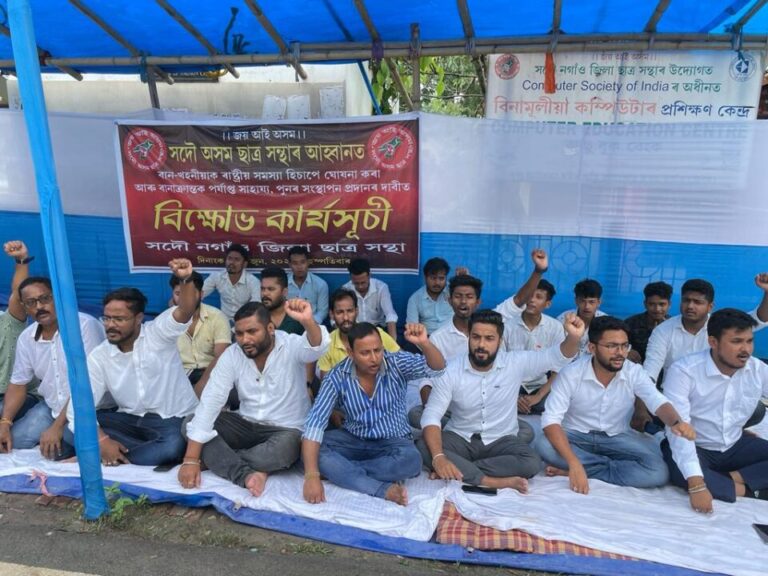 The several district units of AASU on Thursday staged a protest in front of their respective deputy commissioner’s office complex to reiterate the students’ body demand of declaring perennial floods and large-scale erosion that cause huge devastation to lives and property of the people, as a national problem.

In Jorhat, holding banners and placards, the AASU members shouted slogans in support of their demand. They said in view of the floods occurring every year, coupled with massive erosion by the Brahmaputra, and unleashing a trail of devastation and misery by rendering a large number of people homeless, the Centre should tackle both the problems as a national one.

They also sought opening up of adequate relief camps, distribution of food items, baby food, fodder, etc., to the present flood-affected people by the State Government.

In Nagaon, over hundreds of agitators led by the president and incharge secretary of the district unit of the students’ organisation respectively Gauri Shankar Saikia, Kankanjyoti Boruah and central executive Rantu Sarma, participated in the stir.

During the stir, the protesters also demanded immediate assistance from the government as well as rehabilitation of the flood-hit families under Kampur, Raha, Nagaon and other flood ravaged revenue circles of the district.

On the other hand, local MP Pradyut Bordoloi on Thursday visited the flood ravaged areas in the greater Kampur and reviewed the flood situation there. During his trip, Bordoloi also visited several flood relief camps and interacted with the inmates.

Besides, he distributed food materials, drinking water and other among those inmates of the relief camps.

While speaking to media persons here, Bordoloi said that the sudden floods were a result of release of additional water from Kopili hydro-electric power project.