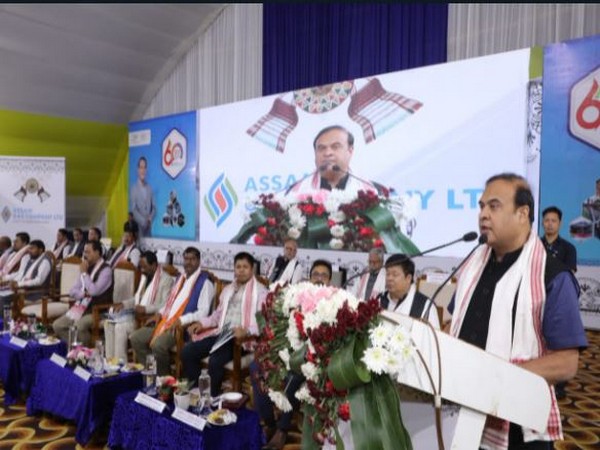 Chief Minister Dr. Himanta Biswa Sarma urged Assam Gas Company Limited (AGCL) to strengthen its gas grid network and increase its capacity and reach to transport gas to neighboring states and countries. He made this call while taking part in the diamond jubilee celebration of Assam Gas Company Limited at Duliajan in the Dibrugarh district today. Chief Minister Dr. Sarma also called upon AGCL to enter into the business of setting up electric vehicle charging stations in the state. He also said that AGCL should venture into tapping energy generated from electricity other than energy produced from fossil fuels in view of the growing importance of innovation and diversification in today’s business world. Underlining the contributions of AGCL in the industrial landscape of the state during the last six decades, the Chief Minister congratulated its past and present executives and officials and paid tributes to those whose vision and initiatives were instrumental in setting up this industry. He also recalled the invaluable contributions of noted technocrat and engineer Debendra Nath Acharya who played a crucial role in the consolidation of AGCL during its fledgling stage. Stating that AGCL has emerged as a reliable and technically sound industry in terms of supply and distribution of natural gas, Chief Minister Dr. Sarma said that today AGCL has become a notable company in supplying natural gas to the vast area covering various natural gas-based industries in Upper Assam. “Assam Gas Company has played a major role in tea production by providing gas in about 420 tea gardens and tea factories located in districts like Tinsukia, Dibrugarh, Sivasagar, Charaideo, Jorhat and Golaghat. In addition, the use of natural gas supplied by AGCL at Power Sector Industries has also played an important role in the generation of environment friendly energy in the state”. Dr. Sarma also complimented AGCL for its ability to reach more than 42,000 domestic consumers as well as about 1,200 commercial establishments in urban and rural areas in almost all districts of Upper Assam. Dr. Sarma also lauded AGCL for its recent success in winning a bid for building the City Gas Distribution (CGD) Network jointly with Oil India Limited in Lakhimpur, Dhemaji, Darrang, Udalguri, Sonitpur and Biswanath districts on the north bank of Brahmaputra as well as several districts of Tripura. Moreover saying that in today’s competitive business sector, there is no alternative but to advance innovative thinking for industrial enterprises, the Chief Minister appreciated AGCL for its pioneering effort to capitalize on the market potential for alternative green fuels in Assam by setting up of the first CNG Station of the state at Chowkidingi in Dibrugarh town. Dr. Sarma also said that various projects undertaken by AGCL under its CSR initiatives for social and economic development of its adjoining areas over the years have had a positive impact on the entire region today. Further highlighting the “Hydrocarbon Vision-2030” of the Government of India, the Chief Minister said that Assam and the North East has immense potential in the hydrocarbon sector. The possibility of hydrocarbons in northeast India can be gauged from the fact that the region has a large amount of hydrocarbon reserves and with its proper use, the region can script a spectacular growth narrative, he said. The Chief Minister also urged AGCL to work in close coordination with the Government of India PSUs, its sister organizations and local community to give a new impetus to its operation and development journey. Industries and Commerce Minister Chandra Mohan Patowary, Union Minister of State for Petroleum and Natural Gas Rameswar Teli, Tea Tribe Welfare Minister Sanjay Kisan, Sadiya MLA & Chairman of AGCL Bolin Chetia, Duliajan MLA Teros Gowala, Naharkatia MLA Taranga Gogoi, Chairman of DNPL Rupam Goswami were present along with host of other dignitaries on the occasion.